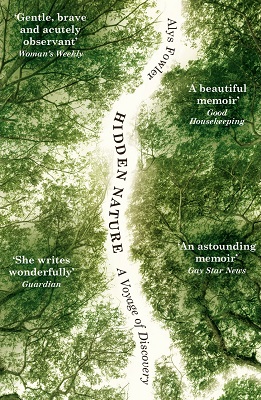 Feel unsettled in herself, Alys Fowler set out to explore Birmingham’s canal network in an inflatable red kayak. She notices the natural in the industrial, from kingfishers darting and huge eels lurking, to plants thriving in the husks of abandoned barges. Yet she begins to notice something more, something within herself. While exploring the hidden nature in the city, she begins her journey towards becoming more herself and coming out as a gay woman.

This is such an elegant book, beautiful and bittersweet. I’ve wanted to read this book for a while, having loved Fowler’s Guardian gardening columns for years. It didn’t disappoint.

The backbone of this book is the nature. Fowler sets out to map the forgotten canals and waterways of Birmingham’s industrial past, marking them off on an old map of the Birmingham Canal Network. The way she writes about nature is extraordinary. Clearly an expert on gardening (she trained at Kew), her relative newcomer status to the world of water is both accessible and endearing; we learn with her.

Fowler also has a gift for description, most likely honed through years of journalism. There’s one particularly memorable passage about a dead eel that is both gruesome and fascinating. You can almost smell the rotting flesh, see the swirl of the eddy as it’s buffeted about. She then goes on to elaborate on intriguing nature of the eel; I urge you to read this book for that bit alone.

Then there’s the personal side to this book. I don’t know if Fowler intended this to chart the course of her emotional journey (to use a cliché), but that’s what happened. She says in the introduction that the idea to explore the canals came from a deep-rooted need to be alone. She begins the journey married to a man and ends it in a relationship with a woman. The canals and her self become intertwined, as thought the more Fowler maps of the water, the more she maps of herself. It does feel as though she’s holding back at times, but it’s hard to forget that these are real people with real feelings, so she’s holding back for a reason. It can’t be easy having your marriage breakdown set down on paper.

Yes, definitely. It’s lovely. It has also just been shortlisted for the Wainwright prize 2018, so I’m clearly not alone in thinking this.

Hidden Nature by Alys Fowler is published by Hodder priced £9.99.