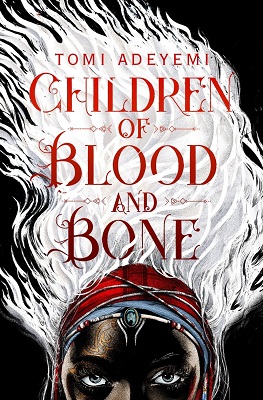 They killed my mother.
They took our magic.
They tried to bury us.
Now we rise.

But under the orders of a ruthless king, anyone with powers was targeted and killed, leaving Zélie without a mother and her people without hope. Only a few people remain with the hidden power to use magic, and Zélie is one such person.

Now she has a chance to bring back magic to her people and strike against the monarchy. Zélie must learn to harness her powers and outrun the crown prince, who is hell-bent on eradicating magic for good.

I hardly know where to start this review! It’s been sitting in my drafts for a good couple of months now, and not because it was terrible. Far from it, in fact.  I don’t really read a lot of Young Adult fiction, so if you’re after thoughts on how it fits as an example of that, this post isn’t for you.

As a story, it’s super. The fictional country (or state or something- it’s not particularly clear) of Orïsha has its roots in west Africa, specifically Nigeria. It merges a vibrant setting with more traditional fantasy ideas; there’s a princess, magic spells, and a decent amount of swashbuckling. The story also moves quite swiftly, which is a good thing considering its 544 pages, and it never felt like a slog to the final page.

I also enjoyed the interplay between the characters. While this is very much Zélie’s story, the others who join her on her quest give depth and colour to her character that I imagine would have been hard to add if it was a solo mission. Everyone is distinct and there’s no danger of getting them mixed up and muddled, as has happened for me in other quest-based novels. I think it’s something about the journey and characters having a common goal that makes them easily confusable.

Then there’s the magic. All of those with magical ability belong to different tribes of magic; Zélie has the power to commune with the dead. There are also those with power over the tides, those who can read minds, and those who can ignite fires with their hands, among other powers. The magic is almost a character in its own right, one that has been suppressed and hidden under the weight of years of prejudice and fear.

Which brings me to my final point; the parallels with current events in the US. There is oppression by a fearful ruling class, pointless and unjust deaths at the hands of authorities, and the stirrings of an uprising. I’ve seen this novel called ‘Black Lives Matter with magic’ and that isn’t far off the mark, but there are plenty of fantasy/YA series that also have that strength against evil theme running through them like a stick of rock (Lord of the Rings, Harry Potter, the Weirdstone books). There are also echoes of Angie Thomas’s The Hate U Give, a YA novel about a young girl who witnesses the police shooting of her friend, but maybe that’s because they’re both tapping into the discontent running through the States at the moment.

I did have a few minor gripes about the style (the phrase “you guys” never fails to prickle me) but on the whole it was fine. That probably says more about me than about the book, to be honest.

Yes, I think I would. There’s a film to be made of it (naturally. Hollywood has never met a bestseller it didn’t want to stick to celluloid) but I’d advise reading the book before the film.

I’d be really interested to hear your thoughts on it. It’s taken me a long time to write these words, and I don’t want them to be lost in a vacuum!

Children of Blood and Bone by Tomi Adeyemi is published by Pan Macmillan priced £6.99.

4 thoughts on “Book Review: Children of Blood and Bone by Tomi Adeyemi”