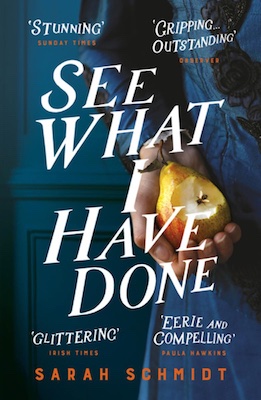 And gave her mother forty whacks

When she saw what she had done

She gave her father forty-one.

On the morning of the 4th August 1892, the bodies of Andrew and Abby Borden were discovered at their home in Fall River, Massachusetts. He was on the living room sofa, she was on the floor of the guest room. Both had been bludgeoned with an axe. All of this is true, and this book reimagines the events before, during and after this notorious unsolved crime.

This book is a sticky, claustrophobic reinterpretation of historical events, in a similar vein to Hannah Kent’s Burial Rites. For the purposes of this book, Schmidt actually went and stayed in the Borden house, which is now a rather macabre (I imagine) B&B. This helps make this book into one of the most densely woven stories I’ve read in a long time.

The action largely takes place over a few days in August 1892, and Schmidt picks out a few details to bring the story to life: the pear tree in the garden and its sticky fruit; the feathers of Lizzie’s pigeons; the rancid mutton broth which is giving the household food poisoning; the teeth of each character. These all were unsettling in their own way and added to the gruesome overtones of the whole story.

That’s actually quite a good word to describe this book: gruesome. This book comes with a suffusion of bodily fluids, and I almost felt like I needed a bit of a wash after reading it. Schmidt doesn’t shy away from the depiction of the Bordens’ battered bodies, and the sheer physicality of each character. For example, pretty much every character is suffering with food poisoning (or maybe just straight poisoning) and the volume of vomit is grisly in its own right.

The characterisation is also skilfully done. Schmidt has clearly spent a significant amount of time immersed in the material available to her, and has conjured the rather strange character of Lizzie from dusty records. None of the characters, with the possible exception of Bridget, are particularly likeable, and I liked how the reader can deduce the changing relationship between Abby and the Borden daughters, from their childhood to adulthood.

However, it does bear repeating that this is an interpretation of facts, and no one will ever know what really happened. I’ve seen a few reviews along the lines of “well, this isn’t what I think happened” but it’s Schmidt’s story and her opinions, so that criticism doesn’t really hold water.

Yes, I would. I’ve always been fascinated by the gruesome, and this does not disappoint.

See What I Have Done by Sarah Schmidt is published by Tinder Press priced £8.99.