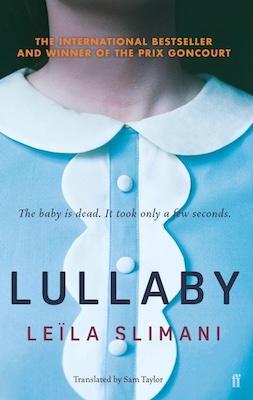 Louise is the perfect nanny. She’s polite, immaculately turned out, stays as late as they need, and throws perfect birthday parties at a moment’s notice. But as Myriam and Paul begin to depend on her more and more, the cracks start to show, and soon the idyllic tableau is shattered.

This book seems to be everywhere at the moment. It’s on myriad ‘Top books you need to read in 2018!’ lists, and has already caused shockwaves in France, where it was originally published. With just cause, I might add. It’s deeply disturbing.

I have no children, but even I found this mightily unsettling. I had to have breaks from reading it, because the whole story seemed so plausible yet so utterly alien. It taps into that trope of ‘having it all’ and the associated parental guilt, twisting it until something snaps. Oh and snap it does.

The book starts with the death of the children. It’s on the cover, so it’s not really a spoiler.    It seems somewhat obvious to say this, but having it start with these deaths means that the reader is waiting for the trigger through the whole story. You’re constantly waiting for the spark that blows the powder keg, and the tension that this causes is nigh on unbearable. I won’t say any more, for fear of spoilers, but you almost can’t look away from this book.

I think on the back of my copy it says something like “The new Girl on the Train!” Firstly, I’m getting really blinking tired of everything being the new GotT or Gone Girl. Secondly, yes, it could well be. Both of those novels take something ordinary and spin it on its head until you’re so wound up,  you can’t get on the 07:38 to Leeds without half-expecting to see a murder. Lullaby does the same and it is masterfully done. It is set in Paris, and translated from the original French, but it could be anywhere in the world. It’s a story of people not place.

Yes, by George. But take it slowly and have lots of breaks. Hold your kids tight.

Lullaby by Leïla Slimani is published by Faber & Faber priced £12.99.