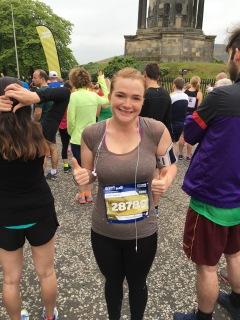 I was so much more relaxed about this race than the Great North Run. Before the GNR, I was worrying about whether I’d make it to the end, what the weather would be like, whether my legs would fall off in a freak leg falling off incident. In the event, I made it to the end, the weather was uncomfortably warm and my legs are definitely still attached. Knowing that the things I’d worried about before either hadn’t come to pass or were survivable definitely made the run-up to this race that bit more easy (pun absolutely intended). I’d done it before, I could do it again.

I was also trying to go more slowly this time than last, actively slowing myself down. I estimated my time down when signing up and I’d practised slowing myself to a lazy jog when setting off on the long runs. I’m very much in the “use all your energy up in the first mile” camp usually, which is super for sprints but not so great when you’re running on empty with 12 miles to go.
And you know what? I had a really lovely run.

I was aiming for 2 and a quarter hours but expecting more like 2:18. When I got to about 11.5 miles and saw that I had 15 mins to run 1.5 miles, I thought, “you know, I could actually do this” and picked up the pace a bit. By the time I rounded the final bend, I was giving it some welly, which showed in my race pictures.

This is one of those “official” race photos that I actually bought. I’ve never seen myself looking so…ferocious. And freckly. Just look at those fists. The clock when I finished was 2:30ish I think so I thought I hadn’t managed it. I was really disappointed until I check my proper time and saw that it was significantly faster. I’m not ashamed to say I cried a little. There was a lot of emotion going into those final miles. Emotion and energy gel.

I learned my lesson from the GNR and took all the water I was offered. I didn’t actually drink that much, but I made damn sure I had some water in my hand at all times. I did partake of the offered energy gel at 9.5 miles- I’m not one to turn down a freebie- but the resulting stitch made me wish I hadn’t. I tell you, people were knocking back those gel things like they’re going out of fashion. Even before the race. Did people not have their Ready Brek?! I thought you were only meant to take them when you were so tired you couldn’t manage another step. I mean, I admittedly did use one, but like I said, I’m fond of freebies and I thought everyone else was practically inhaling them, maybe I was missing out.

Well, that’ll teach me to follow the gel-quaffing herd.

Scenery: Mixed. I really liked running by the sea and along Portobello beach, and the bit past the Scottish Government Building was not too shabby either, but there were quite a few long stretches of grey road.

Weather conditions: Perfect for long distance running. Cloudy, no wind or rain, not too hot. In fact bloody chilly at the start.

Atmosphere: Good! People were out in their gardens and on the streets cheering, which made it pretty nice. From the runner side, the other runners were excited and happy to chat. This is good because I’m a bit of a nervous talker and wanted to gabble away to all and sundry.

Course: Pretty good, although the out-and-back couple of miles at the end was not the most fun I’ve ever had. It passed pretty quickly, although I understand that the marathon is just more miles up that road and then back again. I wouldn’t fancy that. Not a hilly course though, especially considering its Edinburgh, the city of hills. The start is downhill for what felt like ages but was probably about a mile.

Tips: Don’t sprint downhill at the start. Don’t do energy gels, kids. Get in the loo queue as soon as you can at the start.

Would I do it again?: In a heartbeat. I had such a lovely run, and felt really good at the end.

And now I’m thinking about my next run (Great Yorkshire 10K in July) and rubbing arnica into my achy thighs so I can be fighting fit for the Parkrun on Saturday. I’ve got the running bug proper now.