What I’ve been up to

Well, it’s been nearly 4 weeks since I last blogged, so there’s 4 weeks of life to fill you in on.

It’s actually been a bit of a mixed time.

On the 14th of July, it was a year since Nan died. That whole week brought back memories of being in the hospice every day and being there when she breathed her last. It was bittersweet. On the one hand, we’re happy she’s not in pain any more, or trudging back and forth to Leeds General Infirmary for chemo. But we obviously wish she was still here. It’s the things she won’t be there for which gets me. She won’t see me get my Master’s degree, or have babies. She did meet Andy, and approved of him, but she won’t see us (potentially) marry.

I don’t go to church, I’m an agnostic atheist (yes, you can be both), so I don’t really think there’s an afterlife. But I think Nan does still live on as part of me. It’s her influence that makes me properly cleanse, tone and moisturise my face before bed. She’s the reason I try to get as many qualifications as I can- “It’s all very well wanting to be a writer, my girl, but a training will pay the bills when words don’t”. Most of all, she’s the reason I’m spending hours of my life every week running round York training for a half marathon. Even though she would never have done one herself.

Wow, that was a little deep for a Saturday morning. I really should’ve just talked about cricket and whatnot.

So in the past 4 weeks, I’ve been doing lots of things.

The best bit about running every other day is being able to eat whatever you like (within reason) and it not mattering too much. I’ve actually cut down majorly on the amount of bread I eat, but I still have time for frozen dairy sweet things. There’s an ice cream boat that moors near our house, so one Sunday after a long run, we indulged. 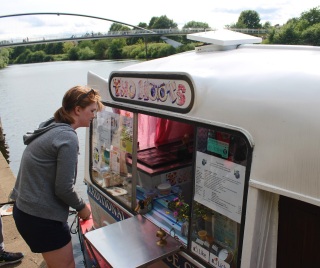 The ice cream is excellent, and they have rhubarb flavour. 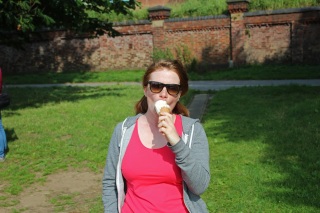 The above was probably the only one where I don’t look like I’m trying to inhale the ice cream. I really should try to be more ladylike.

On the 10th July, we went to the cricket at Headingley.

It was the Yorkshire-Durham T20 match. A T20 match is basically one where the number of overs* is limited to 20 each way. I’ve been to a few of these before, but Yorkshire had managed to lose every match I’d attended from a position of some strength. This had led to me being dubbed a ‘jinx’ by my not at all superstitious other half. Last season, after a few of these games, my attendance was curbed.
So at half time when Durham had 191 runs- a mighty score in T20 cricket- Andy was not best pleased. His brow was furrowed as he muttered something about me not going to any more cricket. My word, that man can chunter.
His mood didn’t improve when Aaron Finch was caught out with the first ball of the match, nor when Andrew Gale followed him 8 minutes later. However, when Jonny Bairstow came in and started whacking the ball around the ground, the clouds on his face parted and he began to look much sunnier.
In the end, Yorkshire won by 5 wickets proving that I’m not a jinx, and Yorkshire can win a T20 match.
I’ve been following the Ashes in recent weeks too. Well, I say following. I pay attention when Australia are playing poorly and turn it off when they’re winning. It’s been jolly exciting.
I’m not quite sure where this cricket appreciation has come from. It seems to rather have gripped me in recent weeks. I’ve still got no idea what silly mid-off is, and I’ve come to the conclusion that it is the Mornington Crescent of the sporting world. In case you have no idea what Mornington Crescent is, listen to this handy clip:
The Running
I live in fear of injury and illness. I’ve felt that tight tickly feeling you get with the onset of a cold for a few weeks now. This has sent me scurrying to the Berocca and as much fruit and veg as I can fit down my throat. My nose is clear. For now.
I also have a mild form of hypermobility. This basically means that my ligaments don’t know when to stop and I can easily do a lot of damaged to my poor muscles. I can’t feel it when I’m stretching too far until it’s too late. Add to that dodgy, misshapen hips, extra boned feet and already very tense muscles and you get an edgy runner. My saviour has been Deep Freeze cooling spray and ibuprofen gel for when it gets a bit much.
The cooling spray basically tells my hips joints to chill out a bit (I’m so punny) and I’ve taken to using it before my long runs. The one run I forgot to apply it for, I ended up stretching by the side of the path after 4 miles, praying my hip would calm down enough to let me run the remaining 3 miles home. I know from bitter, bitter experience to listen to my body so I’m trying to be as careful as I can be without skipping the runs.
On the whole, it’s going ok. I can now easily run 4 miles and feel giddy as a rubber duck on a bouncy castle afterwards. “I THINK I’VE GOT ENDORPHINS,” I sang to Andy after our Wednesday 4 miler. He gave me that look of exasperated endearment that he tends to wear a lot around me.
Tomorrow is the York 10K. I’m going to try and do a run de-brief on here afterwards. I’ve got a running vest very kindly sent by the hospice, I’m going to be wearing Nan’s bracelet she left me, and my mum is coming to watch.
It is a warm-up for the Great North Run, but we are running for Saint Michael’s Hospice. If you fancy donating, please go to Justgiving.com/caitlin-rushby. We will be doing a proper plea for donations ahead of the Great North Run, so there’s still time, don’t worry.
I’m actually pretty excited about tomorrow’s run. Check back then for a de-brief.
Caitlin x
*I’m not going to explain what an over is. Go forth and Google.