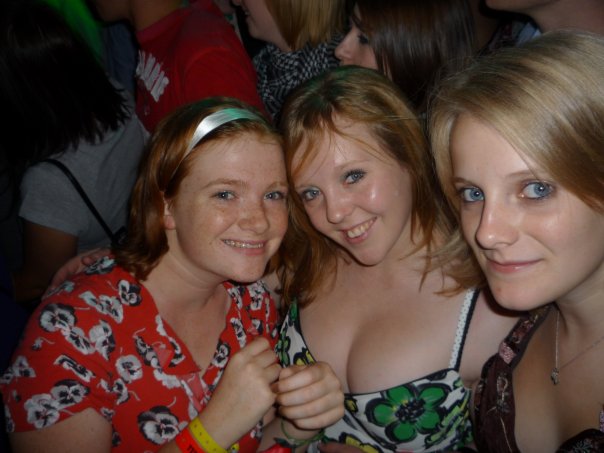 What I’ve been up to

I’m late, I know. I’m terribly sorry and I have no excuse.

This past week I’ve been A Good Citizen and doing a little light Civic Duty (light being the operative word). It essentially means being confined to a room with a coffee machine, a few strangers, and a stack of novels. I’ve read three books in the past 5 days and my brain is overwhelmed with other people’s words. So this week has been characterized by cabin fever and stories.

Last weekend, however, was a different story.

Before I went to university for the first time, I was a little reserved. I know, hard to believe. I’d had a horrible gap year experience, had come home and didn’t really want to leave again. My mum, fearing that she’d be stuck with me taking up the only bedroom with an en suite for the forseeable future, drove me up to Glasgow, moved me in and made damn sure I wasn’t coming home till Christmas. Her last act of pushing the fledgling out of the nest was to steer me to the kitchen door of my halls flat and push me through it, hissing, “go and make some friends!” On the other side were two ladies I like to call Joey and Anna.

Seven years on, and I’m back from spending the weekend with them in Manchester. We’ve rather spread out after uni, geographically speaking, but for a very brief moment, we were together again.

Trying to find a city centre activity for three people that includes everyone equally isn’t the easiest thing to do. Cinema was out because we didn’t really want to spend 3 hours in a dark room not talking to each other. Bowling was out because I’m terrible and I get grumpy like a toddler when I have no natural ability to do something*. Standard Manchester tourist fodder was out because we’d all done it before and nothing has really changed recently. What do you do in a city you’ve been to many times before when it’s rainy and cold? You go and pay someone to lock you in a room of course.
I’d never done one of those locked room escape experience things before but had heard things on the grapevine. The premise is a simple one. You are locked in a room with an hour on the clock and you have to solve puzzles and find clues to get out. Unfortunately, the only space we could get in the entire city was for the trickiest one of all; the Treasure Hunters room at Lockin Escape.
I’m going to cut to the chase now and tell you we failed. We got to the last clue with 1 minute on the clock. To be honest, we wouldn’t have made it that far if the man on the other end of the walkie talkie hadn’t been so free and easy with the hints. Having said that, we had a bloody good time. A really bloody good time. I’d do another one like a shot.
Then we went to Manchester Art Gallery for a dash of culture. We wandered in, around the History of the Cotton Mills bit, up the stairs, and halfway through the galleries before we decided to leave and search for coffee.

This is me trying not to giggle in front of a painting of the sirens on the rocks. I don’t know who painted it or anything, I just saw the boobs and got Joey to take a picture. I’m sorry. I’m such a child, I know.
I also got her to take a picture of me in front of a depiction of the Napoleon’s defeat in Russia. There’s a little known novel about it called War and Peace. You might have heard of it.

It’s the source for my favourite ever infographic**. It’s from 1869 and by a Frenchman called Charles Minard. It shows the number of men in Napoleon’s 1812 invasion of Russia, their movements, the distance travelled and the temperature on the return path. The thickness of the line corresponds to the number of men. The line is beige on the way out and black on the way back. Napoleon started out with 422000 men and came back with 10000. That is a truly crushing defeat.
I’ve put a link in the caption, click through and have a closer look.
After the art and associated culture, we found tea and cake at Teacup Kitchen in the Northern Quarter. I think both Joey and Anna had been before, but were happy to go again. Either that or I steamrollered them in my need for cake.

The cake wasn’t the cheapest I’ve ever come across, and I remember thinking that it better be bloody amazing cake if I were to spend over a fiver on a slice. You can take the girl out of Yorkshire…
That wedge of cake in front of me in the picture above was my ‘slice’ of pistachio cake. Reader, it was emphatically one of the best wedges of cake I’ve ever had. And I don’t say that lightly. It was green, not too sweet and came with candied rose petals. My mouth is watering as I type. Oh, how I crave another slice. 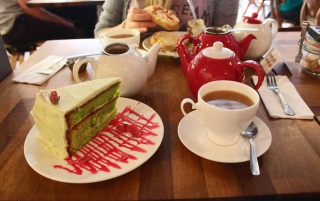 I also had a pot of Sunshine Earl Grey tea. This was ‘a quality blend of black teas with
bergamot with a refreshing burst of sweet pink grapefruit, and a sprinkling of exotic flowers’. Bascially Earl Grey with a bit of grapefruit. The grapefruity flavour came across strongly in the smell, but didn’t overwhelm the flavour. This I liked.
The tea there comes in two pots, one for brewing and one is for drinking. They use leaves, because leaves are better, and you can get unlimited refills of hot water. I say unlimited; the tea leaves have maybe two pots in them, at a push. And that depends on how long you leave them to brew. Speaking of brewing, you also get a timer so you can time your brew time to perfection.
After that I had to get my train across the Pennines to home, taking the memory of a lovely day in Manchester with me.
The Running
I was meant to do the Manchester Park Run (which is a free weekly 5K run that happens all round the country) but I forgot my sports bra. No running happens without the sports bra, so I stood in the rain and provided motivational support for my pals.
I was so grumpy with myself for forgetting it, and so needlessly lugging my trainers to work and to Manchester, that the next day I ran 10K.
I meant to only do 5 and a half miles, but when I got out there and got to the end of my planned route, I felt alright and just kept going. It was hard and I had nothing left in my tank at the end but I did it and ran it in 1 hour 55 seconds. Considering that’s only 56 seconds over my target for the August York 10K, I think that was pretty damn good.
The Fitbit continues to be a source of endless data delight for me. I’ve noticed that as I get further into the running and subsequently fitter, my resting heart rate gets a little bit slower. I think that this is a good thing, correct me if I’m wrong.
I’ve also lost three pounds somewhere in the past three weeks. Weight loss is not my goal, but it is a nice side effect. My friend Annika and I weighed out 3 pounds in sugar last night to see how much has gone from my person and it is quite a noticeable amount.
The proper half marathon training place starts on Monday. This shit is getting real. I’ll report back next week and see what I’m feeling like.
Right, I’m off into town. I’ve been having nightmares this week (I get them from time to time) and as a consequence haven’t been sleeping very well. I’ve also been sleep walking (which the Fitbit has been picking up) and last night I sleep-messaged Joey and Anna. I’ve got no idea what’s going on in my brain, but my instinct is that I need TLC. I’m going to spend some wages on nice bath treats, I think.
Cheerio,
Caitlin x

*I’m not kidding. I’ve played entire games of gutter balls before. And once I accidentally bowled the ball backwards. I will not go bowling.
** Data visualization is what I do, I’m allowed to have favourites.